The Intel patent auction is definitely a golden opportunity for companies seeking to become leaders in the wireless communications landscape within a very short time. The company has recently announced that its massive wireless patent portfolio — including a big chunk of 5G assets — is now on sale, provoking discussion among the market’s insiders. But what should potential buyers know before stepping into the game?

But first, we are going to provide and analyze the latest data on 5G SEPs, including ownership ranking and technology analysis. This is a follow-up to our previous report, which focussed on data released in April. 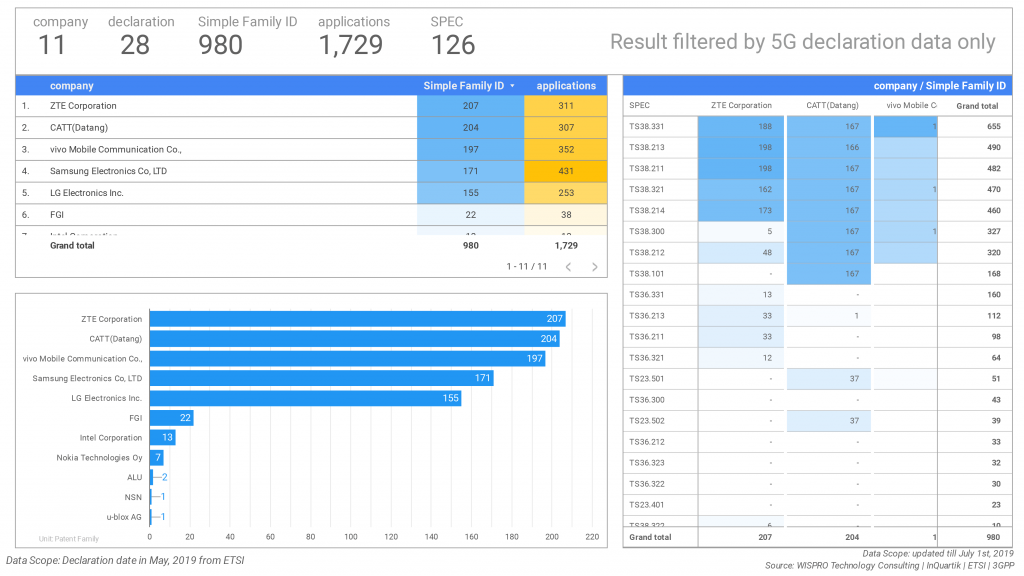 The charts above show that ZTE, CATT, Vivo, Samsung, and LG are the top 5 SEP providers for the month of May. While most SEPs have been declared by ZTE, we can spot a new entry: FGI.

The interactive dashboard also details the number of declared patent families for each technical specification. The Top 3 for the month of May are: 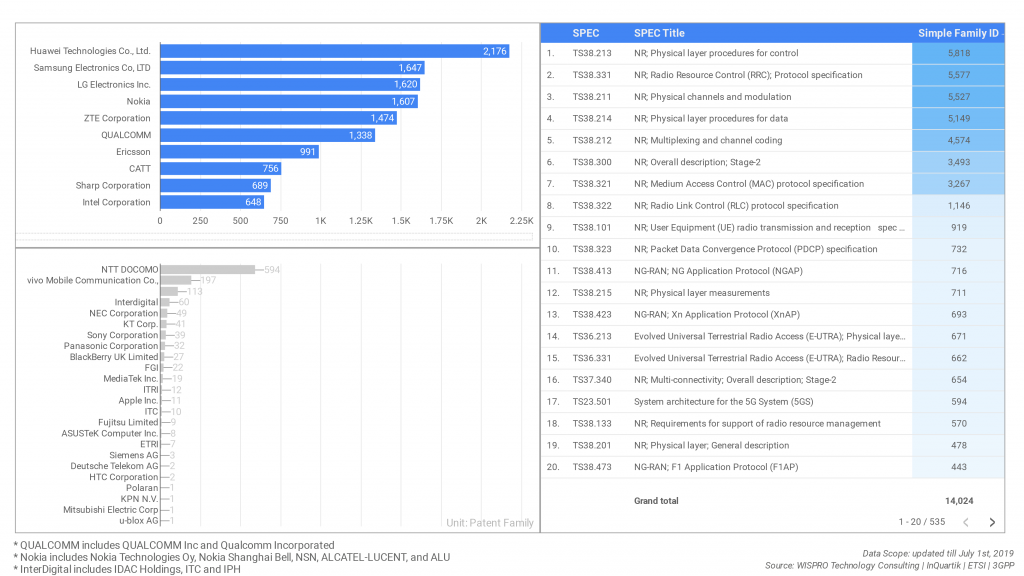 The data for May also highlights some changes in the ranking. In the Top 10, CATT rose from the bottom of the list to position 8 (+203 patent families).

Even though SHARP didn’t increase the quantity of declared SEPs, Intel dropped from position 9 to the bottom of the list. The gap between the two companies is of around 40 patent families.

Last month, IAM reported that tech giant Intel was going to auction its wireless patents — including a big chunk of 5G assets — attracting a great deal of interest from the market.

The article, however, simply reported the number of patents on sale without providing any further details. In the following analysis, we are going to focus on the SEPs declared by Intel. 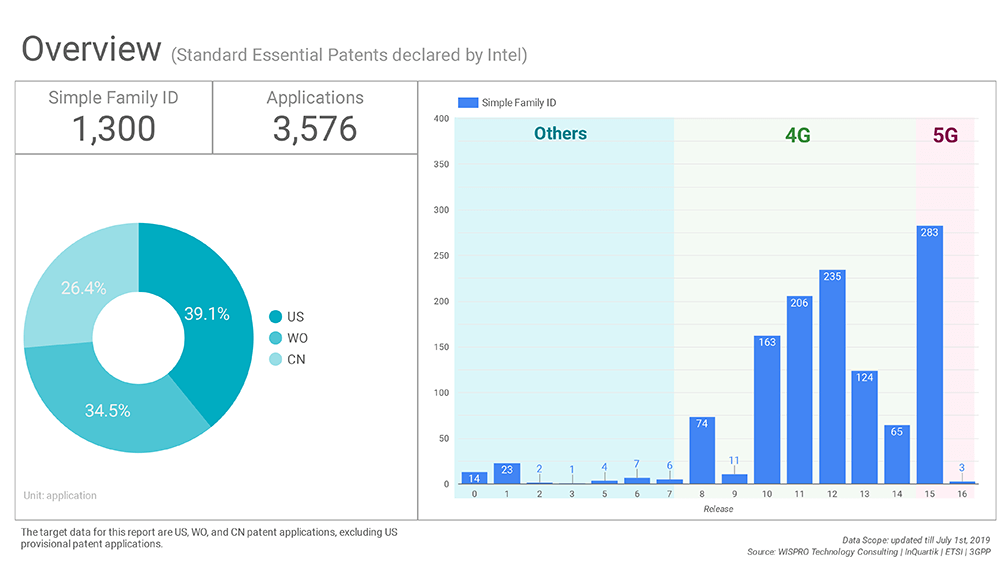 According to the overview, Intel declared 1,300 patent families and 3,576 applications in total. Using the 3GPP classification, we noticed that a substantial portion of patents cover the 4G technology. Besides, the highest number of patent families are related to Release 15. 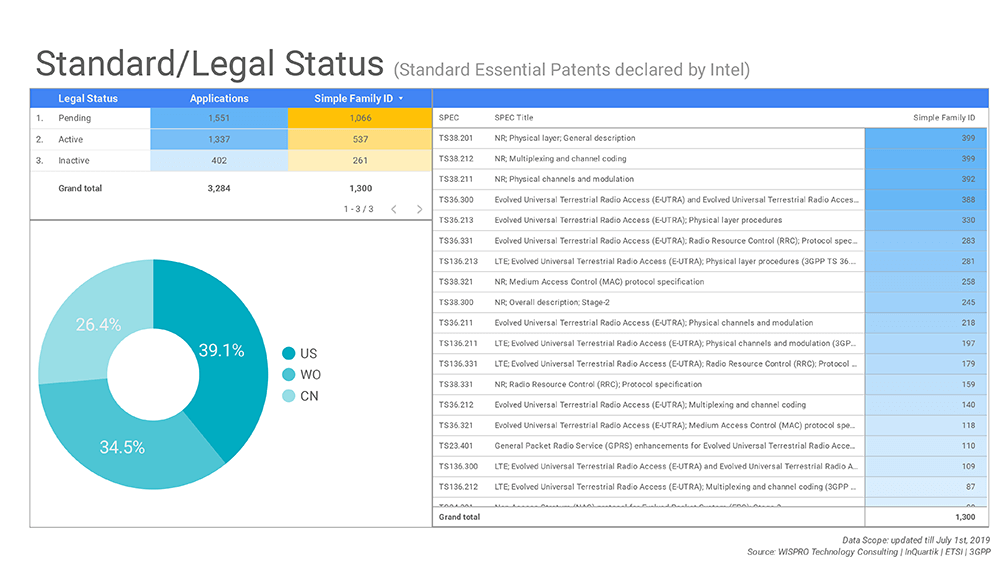 Now let’s shift our attention to the relationship between legal status and technical standard declared.

The table below shows the Top 3 Technical Specifications for each legal status: most pending patents are concentrated in the NR (5G) Physical Layer category, in particular in TS38.212 (Multiplexing and Channel Coding).

As mentioned in our last report, there are at least two critical factors that may have an impact on the quality of SEPs: essentiality and patentability. In the paragraphs below, we are going to show how Intel’s declared SEPs may encounter patentability challenges because of legal statuses being different between members of the same patent family.

First, we created a matrix detailing the legal status of patents within SEP families that cover both US and CN. Among these, we focussed on those that comprise at least one inactive patent (shown in blue). This causes the legal status of patents or patent applications within the same patent family to be un-synchronized: could this bring to patentability issues during examination? In other words, for these patent families comprising at least one inactive patent (which has been invalidated by a third party) , there is a higher possibility of existing prior art references being uncovered by patent examiners from different PTOs. Potential buyers should know such fact before commencing any transaction activity, mainly to avoid investment risk.

After filtering the data, we found 134 patent families (1279 applications) with these characteristics: therefore, the potential buyers of these assets should take extra care in considering them. 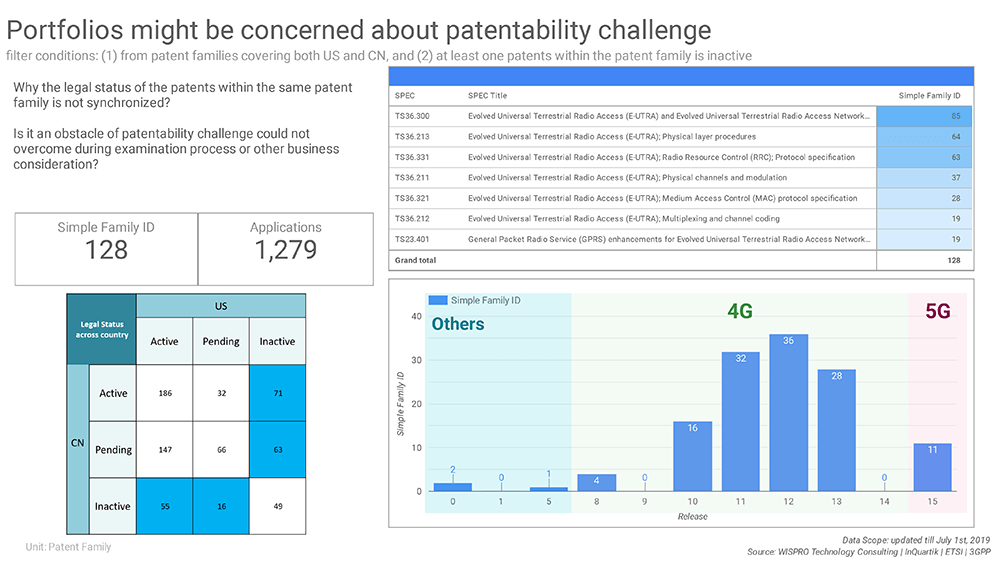 It should be clear by now that digging into portfolios is a practice that every potential buyer or licensee should carry out to prevent issues down the road. As we just saw in the Intel case, in fact, analyzing the data in detail allowed us to uncover potential pitfalls. These insights, combined with an already-consolidated patent strategy, can help in making better decisions.

Stay tuned for the upcoming reports in the series: any feedback is appreciated!

Data disclaimer: We have used commercially reasonable efforts to ensure that the data provided is complete and has been obtained from reliable sources. The information contained in this report is current as of the date of this report and may not reflect any circumstances that occur after such date. This report is not intended as legal advice. All information is provided “as-is” and we make no representation or warranty of any kind. We will not be liable for any lost profits, revenues, indirect, special consequential, exemplary or punitive damages resulting from this report.

The Race for 5G — April Update

The Race for 5G — November Update

The Race for 5G — September Update

The Race for 5G — August Update

The Race for 5G — July Update

Jackson Lin is the Vice President of the WISPRO Group and the firm’s lead consultant. In the past, his expertise is focused on standard-essential patents (SEP), cloud computing, the Internet of Things (IoT), natural language search processing, and medical devices.

Mike Pao is an analyst at WISPRO Technology Consulting Corporation, deeply committed to Big data processing and development of software tools. Mike has a solid understanding of advanced digital communications (especially in Error Correcting Codes) and has experience with Deep Learning.