According to Bloomberg’s report, China’s national security law has forced technology companies to reconsider their business plans in Hong Kong, especially for start-ups. “Entrepreneurs now face a wave of concern from overseas clients and suppliers about the implications of running data and internet services under the law’s new regime of vastly expanded online policing powers,” said the report.

This law is particularly harming the tech companies that handle data. According to Sub-section 4, Section 1, Article 43 of the National Security Law, the police can ask the private companies to provide, delete or restrict the use of the content that is deemed to endanger national security, which causes tremendous uncertainty for the tech companies.

Data regulation policy can both create the rooms for investment or harm the business. Such regulation is often used by the government to affect the market efficiently. From the other side, the rule-maker who tends to comply with the vast country may also benefit from similar laws since the nature of data business is meant to be cross-border. 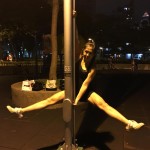