According to BusinessWire, Versatile Video Coding (VVC) became a standard on July 6, 2020, and will be published as an ITU-T Recommendation H.266 by the ITU Telecommunication Standardization Sector ITU-T. On July 22, 2020, the Media Coding Industry Forum (MC-IF) issued meeting invitations to the companies owning patents or patent applications, which are potential standard-essential patents (SEPs) for fostering the formation of a single VVC patent pool.

According to the release from MC-IF, they wish to avoid a repetition of the fragmentation found today in the patent licensing market for the previous standard—High Efficiency Video Coding (HEVC). The fragmentation caused by the multiplicity of HEVC pools impacted the promotion of standardized technology. Currently, there are only 33 companies and research institutes in the MC-IF members’ list. However, the three main HEVC licensing companies—HEVC advance, MPEG LA, and Velos Media—are also included in the MC-IF members’ list. If the members of these three HEVC licensing companies are also regarded as being members of the MC-IF, we can view it as a great relationship between the main participants in setting VVC standards.

We observed the eight meeting reports from the Joint Video Exploration Team (JVET) meetings from “meeting K” in July 2018 to “meeting R” in April 2020 [1]. These eight meetings were held after a Call for Proposal (CfP) in “meeting J.” The following diagram shows a list of the companies holding more than twenty adopted contributions in these eight JVET meetings[2]. According to the diagram, most of the main participants in setting VVC standards are also members of the MC-IF. Other than Broadcom, the main participants unrelated to the MC-IF are three Chinese companies – Bytedance, Kwai, and Alibaba. These three Chinese companies started their research on video coding technologies after the completion of the HEVC standard; therefore, they did not join the HEVC patent pools. However, the three Chinese companies—unlike Tencent—do not participate in the MC-IF. Thus, it is essential to observe the monetization behavior. 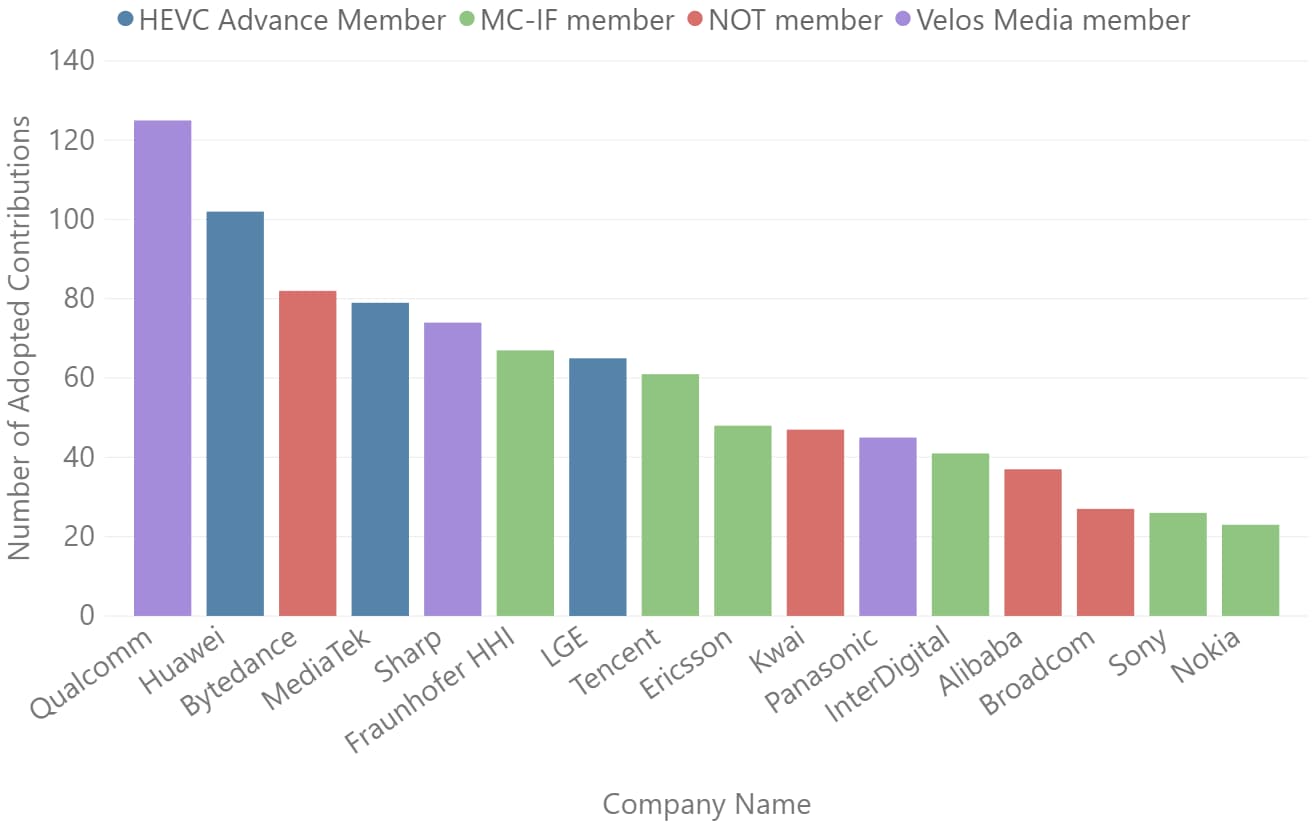 Some companies—such as Texas Instruments and Microsoft—submitted few or no contributions in the JVET meetings, even though they can develop video coding technology. Although they did not join the MC-IF and the three HEVCE patent pools, they still filed many related patent applications and have the ability to provide their respective VVC licensing programs. Although the MC-IF tried to avoid the repetition of the fragmentation, it still needs to overcome some potential obstacles. Therefore, the companies holding VVC SEPs and the companies that want to use VVC in their products should pay close attention to the status of the MC-IF fostering.

[1] At the time of publishing this article, there was no adopted contribution list in the meeting report of “meeting S,” held in June 2020.

[2] If a company is a member of both the MC-IF and the HEVC patent pools, it is marked as a member of the MC-IF.  Additionally, there are no MPEG LA members in the diagram since the number of adopted contributions for each MPEG LA member is less than 20.