During a patent application drafting, one would usually start with the claims, then the detailed description, and finally, the drawings. But I suggest the other way around. That is, the drawings first, then the detailed description, and then the claims at the end. Many believe that the claims are so important and spend at least two days drafting them alone. I believe otherwise. Once a patent application is filed, the claims can still be amended in a preliminary amendment and during the course of the patent prosecution. On the other hand, the drawings can not.

Since drawings can no longer be amended once a patent application is filed, extra care should be taken to ensure that they are as highly detailed as possible. For example, when filing a patent application for a sandwich, e.g., a hamburger, you may want a general representation of the sandwich in one figure. In such a figure, you may just show beef and cheese between buns. However, what if the Office Action finds a sandwich that includes the same elements in the prior art. This will result in a rejection that is difficult, if not impossible, to overcome. Therefore, you will certainly need another figure that shows the sandwich in a more specific way, as illustrated below. 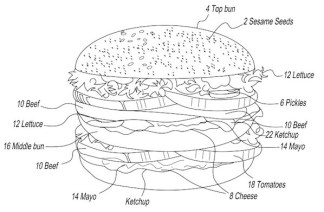 The above drawing makes it relatively easy to overcome the rejection. For example, you can respond to the Office Action and state that the sandwich further includes pickles (6) between the top bun (4) and the beef (10), or tomatoes (18) between the beef (10) and the bottom bun.

Such a drawing also makes it easy to expand your detailed description. For example, you may specify that the sesame seeds (2) are dispersed on the top surface of the top bun (4) and that the bottom bun is free from sesame seeds. Further examples might include: the middle bun (16) is between the top bun (4) and the bottom bun, the mayo (14) is above the cheese (8), the tomatoes (18) are below the ketchup (22), the beef (10) is between the first lettuce (12) and the second lettuce 12. Additionally, the cheese (8) is in contact with the tomatoes (18), the number of slices of tomatoes (18) is greater than the number of slices of pickles (6).

You may also have different drawings illustrating that the sandwich includes: egg at different locations within the sandwich. Furthermore, instead of using hamburger buns, toast, croissant, or hotdog buns could be used, and spinach instead of lettuce. You may also mention that the mayo is optional — the same goes for the tomatoes and the sesame seeds.

From the above, you can see that the drawings are important because they will help you find something that can overcome the rejection in an Office Action. They can be an effective way to expand your disclosure. They are handy when drafting new sets of claims in a child application. A useful reference for drafting claims is using broad generic claims, as well as more specific claims.

About the Author: Daniel Ko