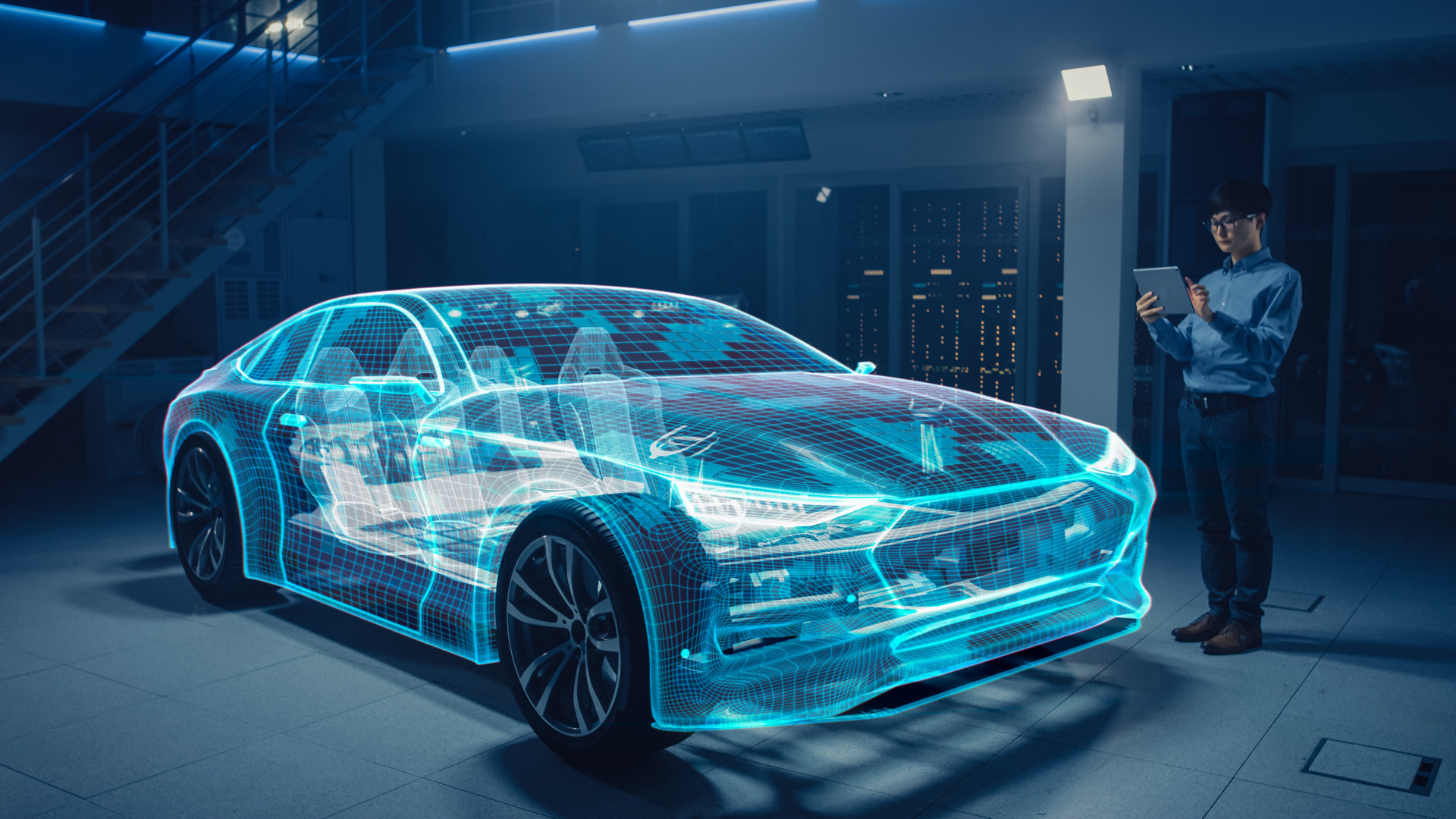 The future car is the hottest topic in the automotive market in recent years, which can be roughly divided into four technical fields: Connected Car, Autonomous Car, Sharing Car, and Electric Car, in sum, CASE[1] technology.  To understand the world’s future car development, we cannot ignore China, which has the largest automobile production. 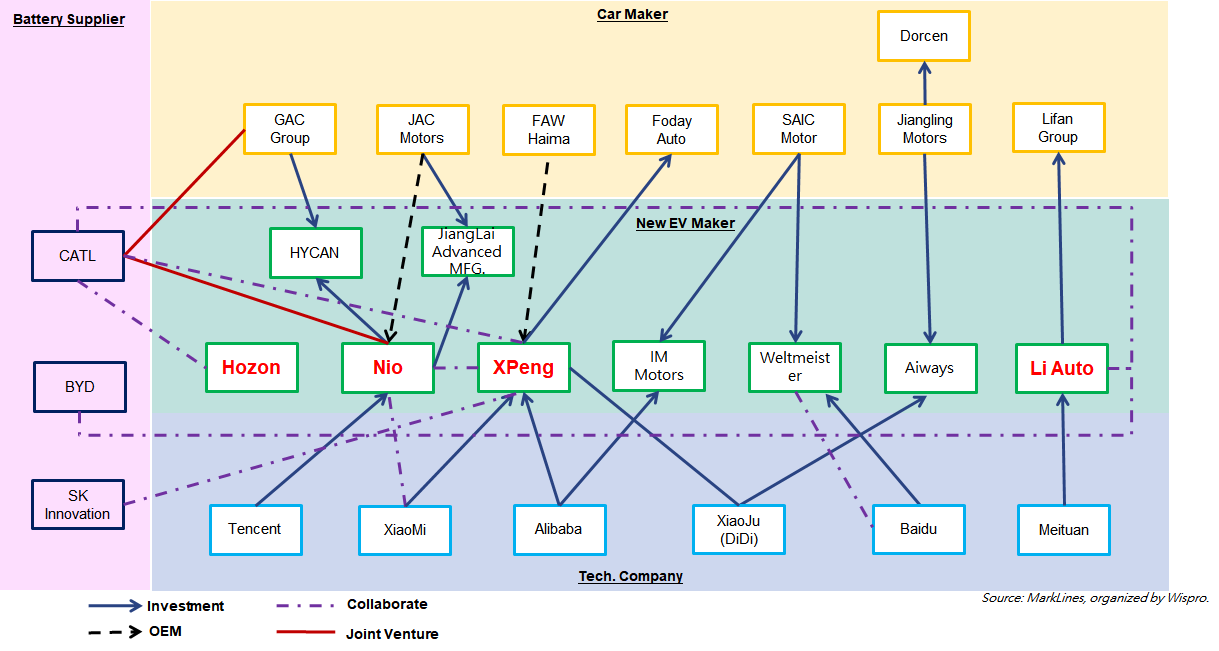 As shown in the investment relationship of the Chinese automotive industry in Figure 1, it includes investments, joint ventures, and cooperation between China’s large traditional automakers (yellow blocks), large technology companies (purple blocks), and China’s new automakers (green blocks).  From the investment relationship, we can foresee the indirect connection between traditional automakers and technology companies through the new automakers in between.  Therefore, China’s strategy of developing future cars by alliancing among the fittest can already be seen in Figure 1.

According to patent research, as shown in Figures 2 to 5, the following analysis will focus on the patent portfolio strategies of the four Chinese new automakers from three different aspects: CASE technology development, international patent coverage, and patent type.

Figure 2 shows the new automakers’ patent portfolio in terms of CASE technology.  According to Figure 2, electric cars account for the highest proportion of patent applications, while shared cars are the least, so it is obvious that new automakers in China favor electric cars more than the rest.  In addition, each automaker has invested considerable resources in the general technology[2] of automobiles, as a necessary basis for supporting the electric cars’ drivability.  In addition, according to our research[3], about 80% of the patents are still in the application/examination stage, which also reflects large resources the investment in a short period.  Such a focused and large resource allocation not only represents the potential of electric cars in CASE being highly expected but also shows the new automakers’ determination of developing electric cars.

First of all, Chinese patents[7] include three types: invention patent, utility model patent, and design patent.  Among them, invention and utility model patents are applied for new technology solutions on products, such as battery materials and motor structures, whereas design patents are applied for new designs of appearance, such as the shape of doors and headlights.  Looking further at the types of patents that new automakers have applied in China, as shown in Figure 4, the number of invention patents of new automakers is more than that of new patents and design patents, but the proportions vary.  Values in Figure 4 will be converted into percentages of the entire patent portfolio for each new automaker in Figure 5 for comparison purposes.

Based on the fact that the term of utility model patents is only 10 years without substantive examination[8], while the term of invention patents is 20 years.  In addition, China extended the term of design patents from 10 years to 15 years in June 2021, and design patents have always played an important role in the automotive industry, both in terms of application and litigation.  Thus, invention patents and design patents are more advantageous than utility model patents for long-term development or patent monetization.  In Figure 5 (the red letter represents the highest value of each patent type, and the green background represents the lowest value), all automakers except Hozon Auto have an obvious imbalanced ratio between different patent types.  To be more specific, although XPeng has nearly 70% of invention patents, XPeng also has the least design patents; and as for Nio and Li Auto, the proportion of invention patents is relatively low.  Therefore, if continuity of patent rights for long-term development and patent monetization is considered, the application strategy of Nio and Li Auto in terms of patent type may not be ideal.

Based on the above analysis, the following conclusions can be drawn: (1) From a technical point of view, the current patent data shows that among the four major technical fields of future cars, China’s new automakers give priority to betting on electric cars.  (2) From the international patent right coverage aspect, little or no patent support can smooth China’s new automakers’ entry into the international future car market.  (3) From the perspective of the patent types in the portfolios, considering that the future car is still in the early stage of development and the product life cycle is long, and the utility model patent is not as promising as other patent types in the long-term development, it is more ideal to reallocate the resources of the utility model patents to design patents or invention patents.

[4] The percentage is calculated without WO patents which provide no substantial patent rights.

[6] According to Investopedia’s report “6 Countries That Produce the Most Cars” on December 08, 2021

[7] According to Article 2 of the Chinese Patent Law, various types of patents are specifically defined as follows: Inventions refer to new technical solutions proposed for products, methods, or improvements thereof. A utility model refers to a new technical solution suitable for practical use proposed for the shape, structure, or combination of the product. Appearance design refers to a new design that is rich in aesthetics and suitable for industrial applications, made of the overall or partial shape, pattern, or combination thereof, as well as the combination of color, shape, and pattern.

[8] Utility model patent without substantive examination poses a threat to its patent validity that can adversely affect the feasibility of patent monetization.